BECOME A MEMBER OF THE UHPH NETWORK!

The Urban Housing Practitioners Hub (UHPH) is a multi-actor coalition that generates incidence in multiple actors from the region, promoting meeting, the exchange of good practices, innovative action and knowledge management in housing and habitat, acting as a Public Good in Latin America and the Caribbean

Considering habitat and housing as priority dimensions of human well-being and development, the UHPH seeks to promote Latin America and the Caribbean's progress in the construction of inclusive, equitable, sustainable, resilient, and prosperous cities, contributing to the achievement of the implementation of the Sustainable Development Goals and the New Urban Agenda.

We dream of a region in which a wide universe of actors working for housing and habitat exchange experiences, practices, and skills to move towards the achievement of the Sustainable Development Goals and the New Urban Agenda decisively and articulately.

UHPH was born in October 2015 during the Habitat III summit, the United Nations Conference on Housing and Sustainable Urban Development. Its formal constitution was created thanks to the support and financing of Cities Alliance and Habitat for Humanity, along with the articulation of various other regional actors, such as the Inter-American Development Bank, the World Bank, academic networks such as RHIVA and REDEUS, private trade union organizations, such as UNIAPRAVI and various Ministries of Housing and Urbanism of the region, Brazil and Chile being some of its precursor partners.

Five years after its creation, the UHPH coalition and platform has managed to position itself as a true catalyst for housing and urban development in Latin America and the Caribbean, promoting the frequent exchange of knowledge and good practices among a series of key actors for the development of the region. In a relatively short time, the platform has produced meetings and exchanges between practitioners in various areas of housing and habitat development, ministers of state, multilateral organizations, social and urban rights defenders, study centers, private organizations, NGOs, foundations, international social organizations, and academic institutions, among others.

The operational structure of UHPH is composed of three dimensions of action:
(i) Promoting Meetings and Exchange
(ii) Promoting Action and Innovation
(iii) Managing Knowledge 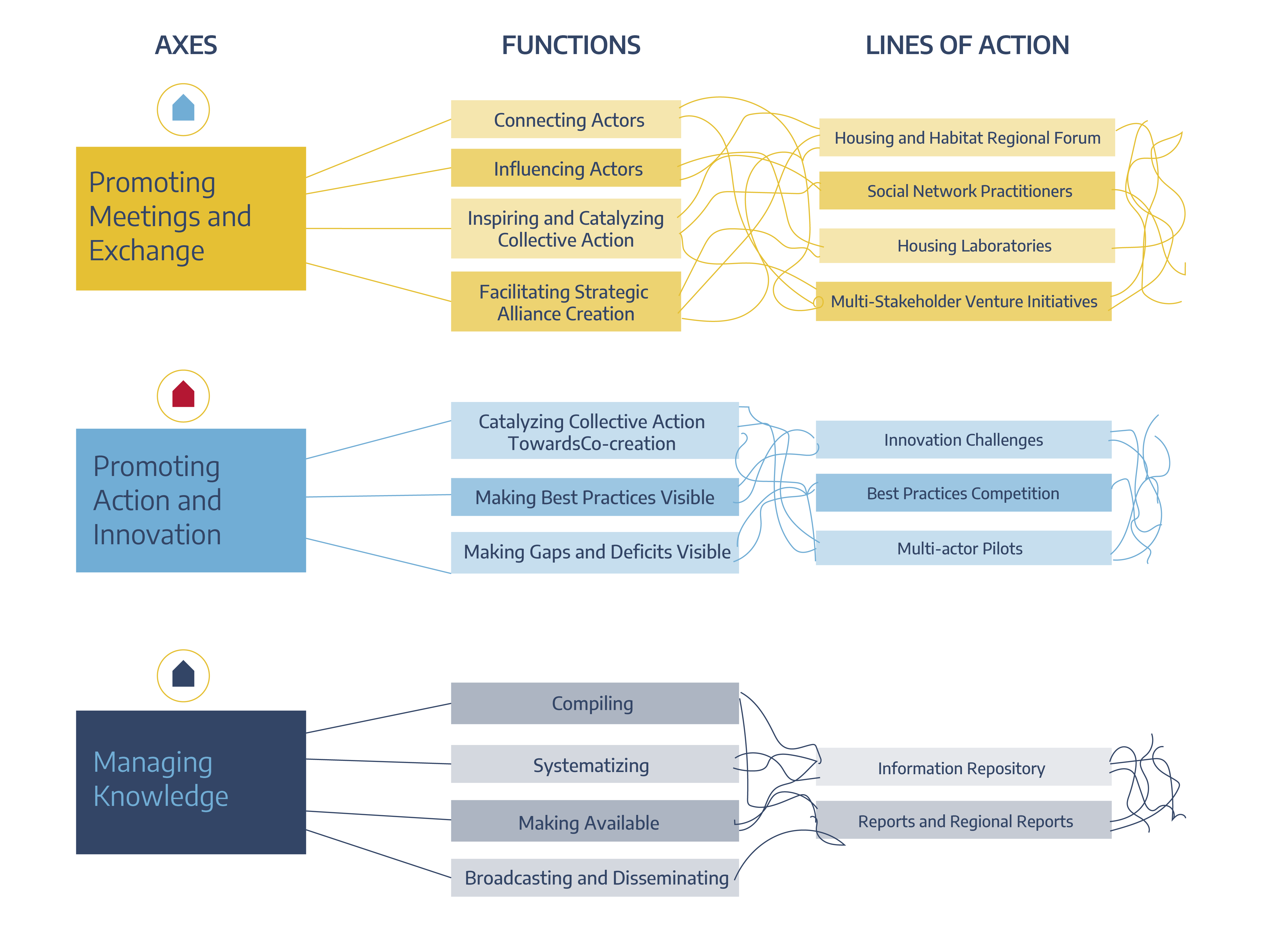 UHPH enhances interaction and meetings both within the coalition and outside, considering the links between the strategic partners themselves, as well as those with other external actors, institutions, and individuals at the regional and global levels.

This dimension of UHPH's operations seeks to generate conditions and promote terms so that the meetings between multiple actors translate into concrete actions that generate innovation and actual impact in the region.

Addresses all activities related to managing content (information, research, good practices, public policies, programs, etc.) that are oriented to application and practice. This dimension is directly related to the consolidation of UHPH as a digital platform that is based on a multi-actor network as a means of knowledge management.

The Steering Committee will be the body that strategically directs the coalition, being a resolutive and frequent decision-making body that addresses strategic, operational, and financial decisions along with those actions of regional and global extension.

*UN-Habitat's contribution to the UHPH Platform has been possible, among others, thanks to the support of the Spanish cooperation through the Ministry of Transport, Mobility and Urban Agenda.

The Advisory Council is a body that brings together several key strategic partners in the development of housing and habitat in the region. In the proposed transitional governance model, the current UHPH Advisory Council will undergo a process of ratification and amplification of its members, in addition to the redefinition of specific roles and tasks.